More waging Tales of Chester the "Good will ambassador" and most excellent salesman. 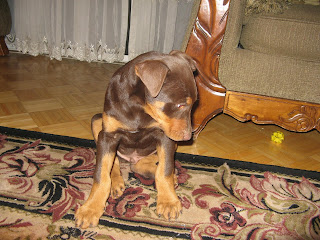 This is far from the first time my Chester, the very handsome, 120 pound Doberman, now teen angel, has lead me to cross bridges to people and events in profound ways. He has unknowingly been a conduit to several good deeds in his young life. Thus his earned title of "The good will ambassador". I confess he needs far more activity then I can normally provide and I'm always searching for creative ways to accomplish what is for me a daily physical challenge. Ball's a major deal. But even a dog needs some variety. When I'm really exhausted I pull out my ace in the hole. If I pretend to be excited and clap my hands and stomp the ground and say three magic words, "Run Forest Run", he will take off like a banshee. Circling the house, pretty much at the speed of light and I will have accomplished both minimum effort on my part and the creation of butter. When I really have to I break down and take him for a walk, always fabulous for him and always a sure visit to the chiropractor for me. Once he gets in a moving forward flow, I can walk him with one finger right at my side, however, it's that first block of pulling that's a killer.


I felt brave recently. I decided for a change of scenery we would walk Ventura Blvd. There was however not a single patch of grass. Just prop palm tree's in front of business's every few feet with a small pile of dirt. We'd been out for a while and would have a long car ride home. I stopped in front of one of them hoping somehow he would be enticed to put it politely "make water". I spoke words of encouragement. I performed pantomime. No dice. Unbeknownst to me a woman had been watching from her car. She got out and approached us saying if he had performed on cue, that really would have been something. I do find it fascinating that no one is ever afraid of Chester. She admired a necklace I was wearing. Of course I immediately whipped out a business card. We struck up a interesting conversation. I'll take small world for 100 Alex. We knew some people in common. Suddenly her body language physically changed and she asked did I know this specific person? I did indeed. Turned out she had lost touch with what used to be her best friend and had been trying to locate her. Well, she did. I have no idea why she was there that day or where she thought she was headed to before this fortuitous meeting. Two things, she called me a few days later to say thank you and she did buy a bunch of jewelry, including something special for her found friend. Also I learned Chester has the bladder of a camel, he waited for his own real patch of grass at home to finally relieve himself, no help from me what so ever was required.

This is how Chester came into my life. I dreamt and pined for what I knew would be the right animal to shift my life at a time shrouded in daily sadness. My closet friends had all died, just so out of order. Right in order, but never welcomed was My father's terminal illness. I has barely recovered from my Mother's bout with needing round the clock care. She got stronger, he got weaker and every day became a red alert.

I ached for something tangible that was full of life. having had many animals in the past I knew it was vital to find just the right one. I worried at first I would choose anything with fur. I soon discovered I was less desperate then that. Already a huge ray of hope set in. In my detailed search I came across a picture of the almost 2 months old Chester on line, then called "Lord". Bought by a young family at Christmas time who lived in a tiny Condo, they quickly realized this was not ideal for them. I was drawn to that picture, printed it out and looked at it everyday. I took a deep breath and made the call only to be told they decided to keep the puppy. I moved on with my search but just was not getting that special zing.

My dad was in hospice but able at that time to periodically still come home on the weekends. He loved dogs, but at this point thought it was a mistake, we had been animal free for over 2 years. I put the idea on the back burner. The next day I got a call from that family, was I still interested in the puppy? My Mom had to be on board, he would be my dog, but she would have to love him. In the most casual way possible, I asked her did she want to go see another puppy, they lived near by and if it wasn't right we would know and keep looking. When we arrived, I asked her to wait in the car. I walked in very calmly and was immediately attacked with puppy kisses. Remaining calm I sat on the floor and tested the puppy's intelligence, alertness, gate and every inch of his body including his teeth and romp. I walked away and called him and zoom he was right on my side. He was virtually ignoring any one else in the room. I knew with every inch of me I was looking at my dog. But! One more person had a vote. I put on my best poker face and asked my Mom to come meet the dog. I said nothing else. It took her about 2 minutes before she whispered in my ear, lets get him.

I felt the whole in my heart mending instantly. I started smiling that day and every single day since.

I didn't tell my dad, instead I called the hospice to make sure I could bring a puppy, I left out how huge he already was and knocked on my dad's door asking him did he want to meet his new grandson. He said, I knew you where going to do this! They had a very complex relationship. Chester was a non stop energy marathon, he often hurt my dad's frail skin just with a innocent how you doing paw. He also tore apart the carpets, the furniture, the door screens, ate the paint off the walls and frequently ingested remote controls, eye glasses, batteries, rocks and plants. I'd never seen anything like it.

Chester loved my dad and got excited every time he came home and when he could not we went to him. However, a few months later my dad was back in home hospice, they where doing there best to kill him by over medicating him, by the way, there really excellent at that, he was hallucinating from the medication, it was awful he was in a 24/7 bad dream. At one point I went in to see if I could help him at all. He thought he was in the other hospice, would not believe he was home and wanted to go home. No amount of logic from me could convince him he was. Finally he said, if I was home I would have my dog. Ah Hah! just the break I needed, I ran and got Chester and put his paws up on the bed so my dad could see him and feel him. It was the only thing that worked and he finally rested. Shortly after that we fired the home hospice workers and my dad recovered completely from there barbaric methods and went on to live in and out of hospital hospice care for nearly 2 more years. At the very end again it was Chester on his mind and in his heart. They where testing his remaining capacities and the Doctor came out and said, no I'm sorry he is rambling, he kept talking about his crazy dog who eats car seat belts.

Once I could really focus on what Chester needed most, discipline, exercise and most important of all a shift in my own energy. He became the teen angel he is today. He still is non stop energy, but he is the most loving and lovable dog I have ever known. Our connection is intense and as I said earlier this was not the first time he lead me to cross bridges to people and events in a profound way. I'm fairly certain it won't be the last. Also not the first time his presence has bought in sales earning him yet another title of most excellent salesman.
Posted by Vintage Shari at 1:08 PM No comments: Links to this post

Notes from the lane Contributor

Vintage Shari
Following my life long passion for Vintage jewelry. I tried following my bliss, but it put out a restraining order. I started selling on feedbay over six years ago. No need to explain a total lack of interest in building corporate houses off the sweat of this back and so was led to opening my shop http://www.rubylane.com/shops/vintageshari "Wear me out Vintage Jewels" on ruby lane 2 years ago. I love it there! Recently opened a second shop on Ruby Plaza http://www.rubyplaza.com/shops/vintageshari-rp called "Wear me out Vintage Jewels 2 Now" Been writing blogs there for a while and look forward to having this venue to expand my horizons and talk about the world the way I see it, a little bit to the left.